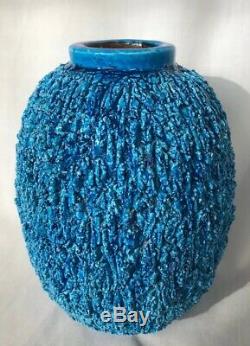 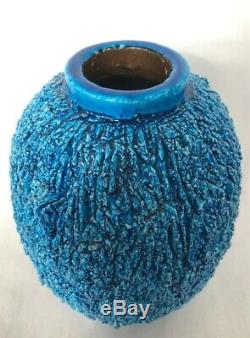 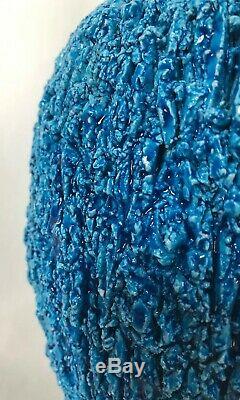 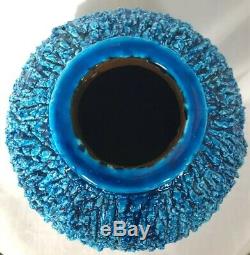 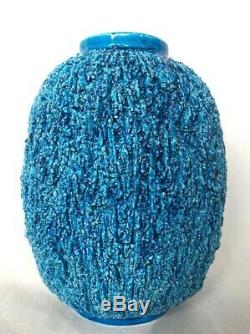 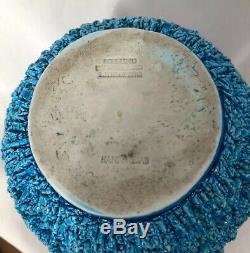 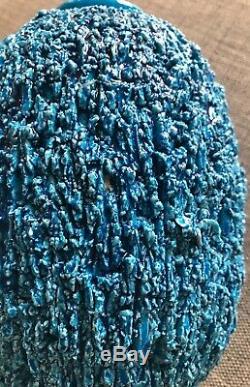 GUNNAR NYLUND LARGEST CHAMOTTE Turquoise Glazed Stoneware Vase RÖRSTRAND SWEDEN. The vase is also called Hedgehog and is hand Made in stoneware. The technique is still a question mark when never fully documented. EXCELLENT condition even though used and with only minor flaws which is normal on this type of vase.

There is one flaw where you could notice the stoneware see the two last picture from different angels. Stamp signed: NYLUND RÖRSTRAND LIDKÖPING. Measure: H 8 1/4 (21 cm), circumference 20 (50 cm). Nylund was born in Paris in 1914, where his Danish mother, the artist Fernanda Jacobsen-Nylund and his Finland-Swedish father, the sculptor Felix Nylund, were studying.

In 1917, the family moved to Copenhagen, moving later to Helsinki, where Nylund attended elementary school. When the Finnish civil war broke out, he moved with his mother in 1918 to Denmark and continued his studies at boarding school.

Following graduation in 1923 and completing an architecture internship and studies in ceramics in Helsinki, he started studying architecture at the Royal Danish Academy of Fine Arts in Charlotteborg, Copenhagen. He became practiced in sculpture by assisting his father Felix, who encouraged him in the study of animals. Nylund did some extra work at the Bing & Grondahl Porcelain factory, designing new products for a Paris exhibition.

He was then offered full-time employment by the company and as a result gave up his architecture studies. At Bing & Gröndahl, his mentor was Paul Gauguins son Jean. Nylund created a few thousand unique pieces at Bing & Gröndahl. Gunnar Nylund was renowned for his revolutionary stoneware in matte glazes and novel colors, and also for the mass production that Nylund & Krebs started in Patrick Nordströms workshop, which they later took over.

Prior to a major exhibition in 1930 at Bo in Copenhagen, they launched SAXBO, a groundbreaking Nordic series of iconic stoneware, mostly undecorated in matte glazes and novel colors. The SAXBO stoneware generated a lot of attention at a Svenskt Tenn exhibition, the same year that Nylund was recruited to Rörstrand, at that time owned by Arabia. In order to start crafting stoneware the young ceramist was moved to the companys factory in Lidköping, which was relatively unknown at that time and which focused solely on porcelain production. There he succeeded, thanks to his own specially developed technique, to produce the first Swedish matte glazed stoneware and sculptures in shimmering colorful stoneware chamotte, which was very popular and had an important impact on modern Swedish ceramics.

Nylunds stoneware at that time featured Song-inspired crackelé and oxblood glazes pieces that ranged from monumental original sculptures in stoneware chamotte and two-feet high urns to moderately priced miniature vases and bowls. In the mid-1930s, the Chamotte was produced both in series and original sculptures.

After a one-year break at Bing & Gröndahl in Denmark, Rörstrands new chief Fredrik Wehtje managed to get Nylund to return to Lidköping in 1937. Here he designed numerous tableware series and laid the ground for all the factorys 1940s collections, featuring innovative glazes. The item "GUNNAR NYLUND LARGEST CHAMOTTE Turquoise Blue Stoneware Vase RORSTRAND SWEDEN" is in sale since Saturday, March 7, 2020.

This item is in the category "Pottery & Glass\Pottery & China\Art Pottery\Scandinavian Pottery". The seller is "aiae97" and is located in Bromma, Stockholm. This item can be shipped worldwide.